Dolphin XV V UL Bohemians
By Aoife O’ Callaghan
It was a damp and blustery start to the day for the Musgrave Park natives as they took on Munster rivals UL Bohs in round four of this years All Ireland League. After a loss to Navan the week before Brian Scott was hopeful that they would return to winnings ways on home soil once more.
There was one last minute change to the squad just before kick off as 2 nd row Alex Denby came in in place of former captain Dave O’ Mahony due to a late hamstring injury. 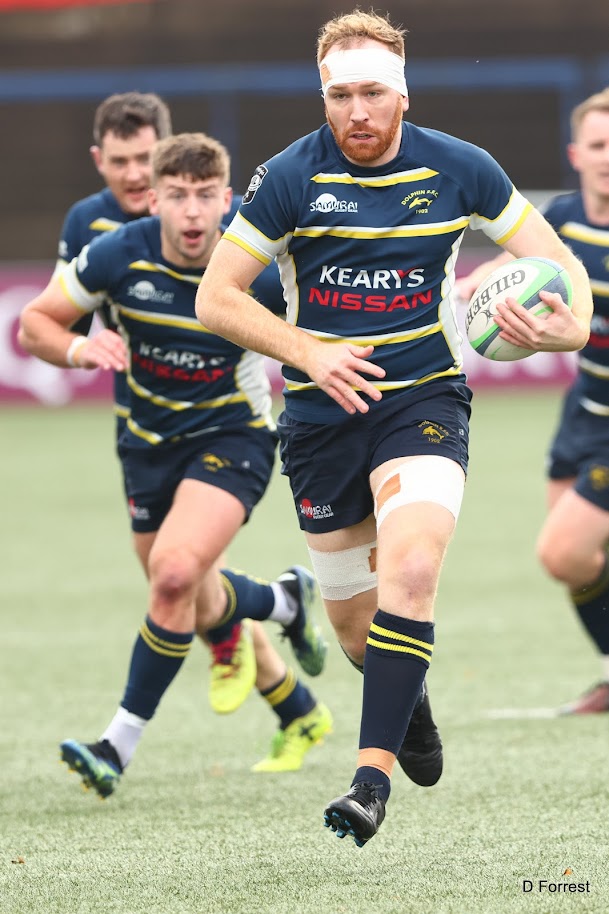 It was the home side that got the first score of the afternoon as Tomas Quinlan slotted over a penalty in the 8 th minute. Dolphin were soon down to 14 men as James Rochford saw yellow, but this did not affect them as they earned themselves a penalty try just a few minutes later. With just under a
quarter of the game gone Dolphin led 10-0.
It was Rob Reardon that found the try line in the 23 rd minute after a long pass from Quinlan landed perfectly in his hands. After a quick dummy step around his Bohs counterpart he crashed over the whitewash. Quinlan quickly converted and extended their lead to 17-0. 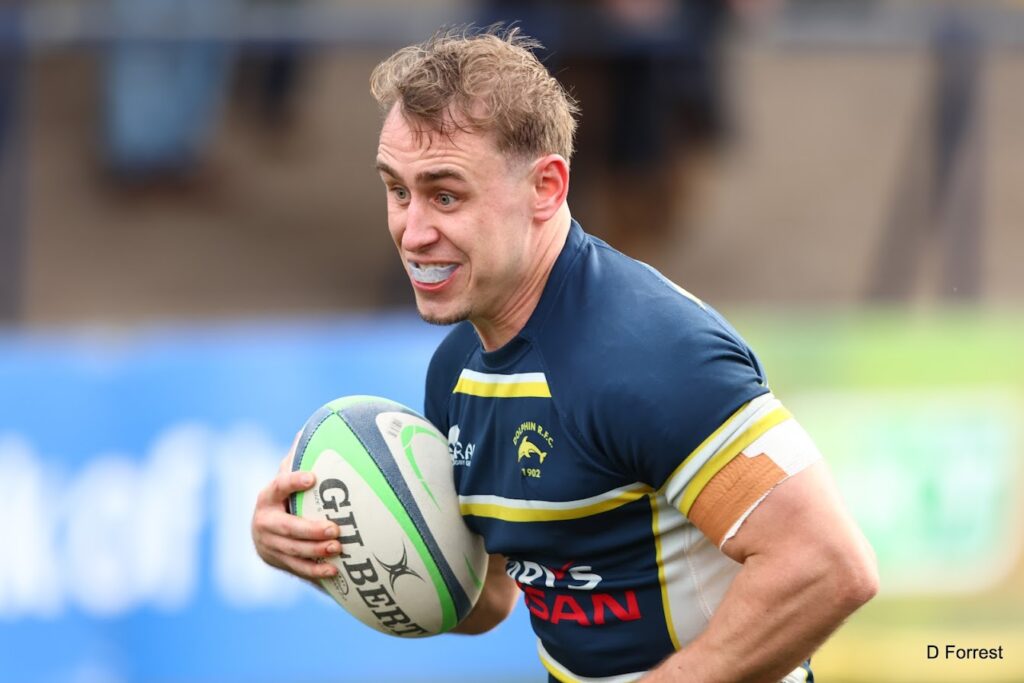 Dolphin’s third try in under half an hour came just minutes after Reardon’s as inside centre Cam O’Shaughnessy broke the line out of nowhere leaving Bohs stunned. Another Quinlan conversion quickly followed. 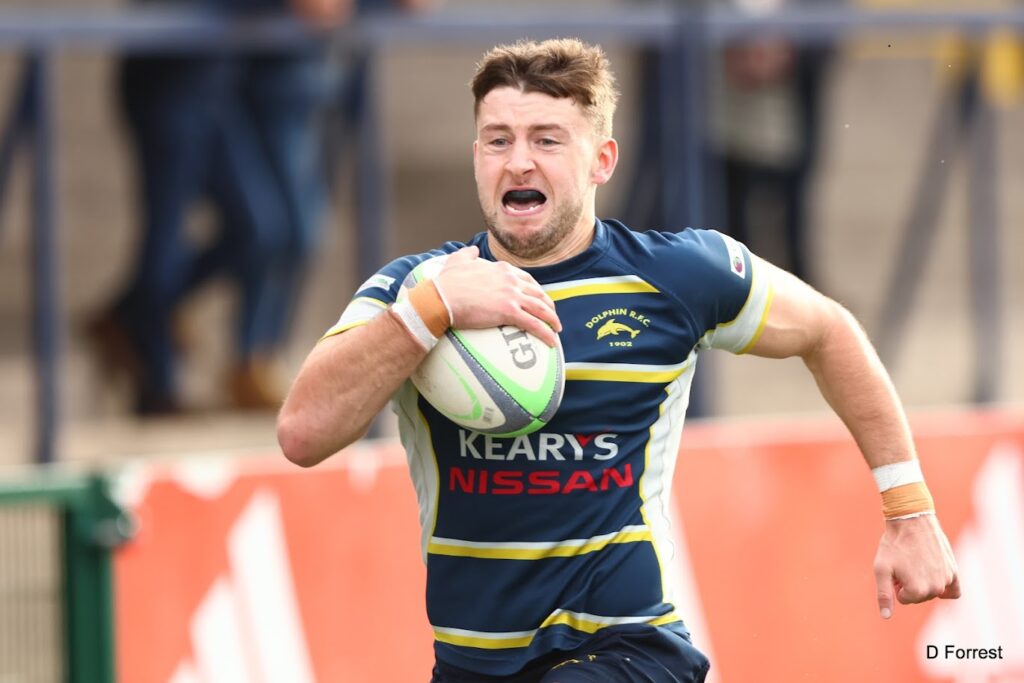 The closing minutes of the first half were a hectic affair which saw Dolphin receive their second yellow card of the day as number 8 Craig O’ Herlihy was sent to the bin. The half- time whistle was eventually blown and the score-line stood at 24-0 in favour of the home side.
Starting the second half with just 14 men Dolphin only conceded the one try before O’ Herlihy returned to the field. Two more tries from Bohs soon followed which closed down
Dolphin’s strong lead as the score line now stood at 24-19 with only 15 minutes remaining in the game. But Dolphin retaliated as James Rochford crashed over for what should have been their final
try of the afternoon. Unfortunately the touch judge deemed that a pass went forward before Rochford found the line resulting in the try being disallowed. 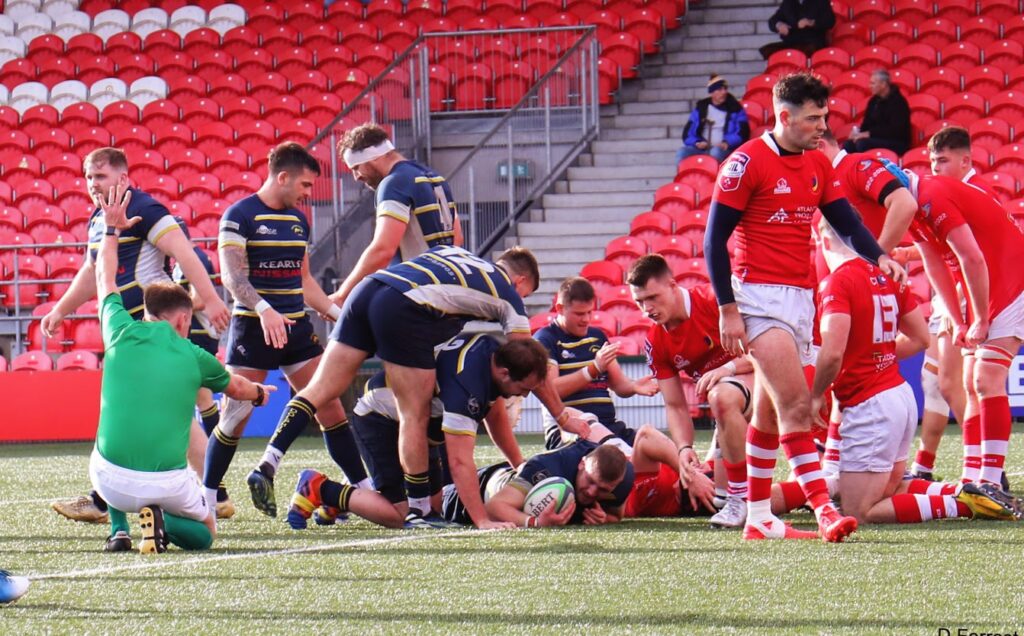 Thankfully a penalty in the 73 rd minute from Tomas Quinlan put distance once more between the sides as it brought the score to 27-19 with just under 10 minutes remaining.

But Bohs had one more trick up their sleeve as they crashed over for their final try in the 77 th minute. After a missed conversion the final score stood at 27-24.
This is the second home win for Brian Scott’s side this season. But they fall just short of bonus point territory so remain 8 th in the table.
Next up for us is a trip to Tipp as we take Nenagh Ormond in New Ormond Park this weekend.