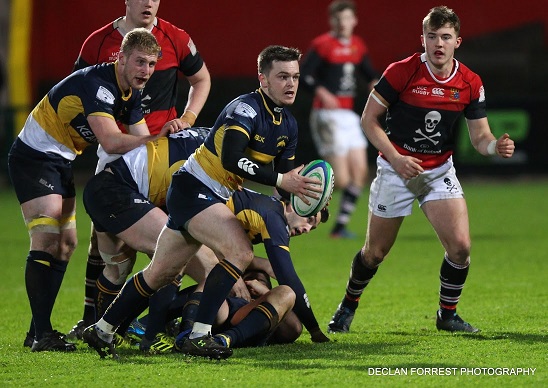 Dolphin seniors got off to a great start to 2018 in the AIL with a hard fought 12 – 9 win  against a fancied UCC side.

UCC were first out of the blocks with a ‘soft’ penalty from a UCC maul after 10 minutes, which was converted by outhalf Peter Sylvester.  UCC kept the pressure on Dolphin for the next ten minutes but some solid defence meant they couldn’t turn the pressure into points.

Then it was Dolphin’s turn and they mauled well from a line out in their own half almost to the UCC 22. The backs took over and a couple of plays later Barry Keeshan sprinted towards a gap in the UCC defensive line only to be brought down by a high tackle. ‘Keesh’ slotted the resultant penalty to level the match.

UCC would regain the lead shortly after when Dolphin were pinged for not releasing after some scramble defence and with the advantage coming Sylvester slotted a drop goal. The rest of the half was a war of attrition which led to mistakes on both sides, with no quarter asked or given, and the score remained 3-6 to UCC at the half time whistle.

Dolphin forwards, led by James Rochford and well marshaled by scrumhalf Daryl Foley, started to get the upper hand early in the second half and they put Keesh in position for a drop goal which he duly landed to level the score 6-6. Unfortunately UCC went straight back into the lead with a converted penalty from a ruck infringement a couple of minutes later.

The Dolphin bench contributed well, a crunching hit by prop Johnny Leahy and a steal by flanker James Vaughan leading to two crucial turnovers. Dolphin won a scrum penalty inside their own half and kicked to touch on half way. A quick line out and Keesh kicked high to the UCC 22, the full back fumbled and the ref penalised a UCC forward for picking up the knock on. Keesh stepped up and kicked the penalty to level the scores again 9-9.

The next period saw play go from 22 to 22 with neither side able to make a breakthrough. Dolphin no 7 Kevin Allen, no.8 Kevin O’Leary  and Foley especially making life difficult for UCC, starving their backs of any decent ball.

Another penalty from the now dominant Dolphin scrum and Keesh kicked to the corner. UCC stood off the Dolphin lineout fearing Dolphin’s maul, Rochford then crashed up the middle before Foley fed Keesh who slotted the sweetest of drop goals despite the onrushing UCC line. Dolphin led for the first time in the match 12-9.

The intensity rose again and the referee felt the need to issue three yellow cards, the first against UCC and the next two against Dolphin. UCC spurned an easy 3 points in front of the posts to level the match and decided to go for the kill and kicked to the corner. But Dolphin swallowed up UCC’s attempt at a maul and turned the ball over.

In the last few minutes of extra time, UCC (now back to 15 while Dolphin still only had 13 on the pitch) pressed hard inside the Dolphin half. A clash of heads by two Dolphin forwards while defending went unnoticed by the referee so UCC continued to attack hoping to capitalise on their now 15 to 11 player advantage. But some terrific defence by the Dolphin players still standing forced a knock on by UCC and the Ref blew the final whistle to the frustration of the UCC players and to the delight of the very vocal Dolphin support.