Since its founding in 1902 Dolphin has had a strong link with the Rugby Students and Alumni of Christian Brothers College on Sidney Hill. Over a hundred years later the link remains with a number of the Current Dolphin RFC Senior team having played schools rugby with CBC and the Mini and Youth sections of the club boasting a large portion of current CBC pupils.

Last Saturday morning a number of the CBC Squad who have played mini and youth rugby with Dolphin visited the club to present their long time coach in Dolphin, Barry O’Meara, a token of thanks for all the hours on the pitch through out their journey from U7s. 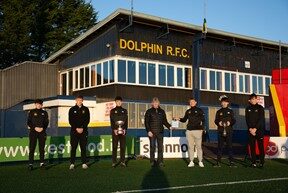